How age gap varies with age

We surveyed an international 21,346 people to find out. We asked participants what was the maximum and minimum aged partner they would have a relationship with. As we knew the participants ages we could generate age gaps for males and females aged 18 to 75. Lisa50 is open to males, females and non-binary users. However, our data doesn’t include non-binary genders due to the volume of results.

The infographic displays the results visually before we start to look in more detail. 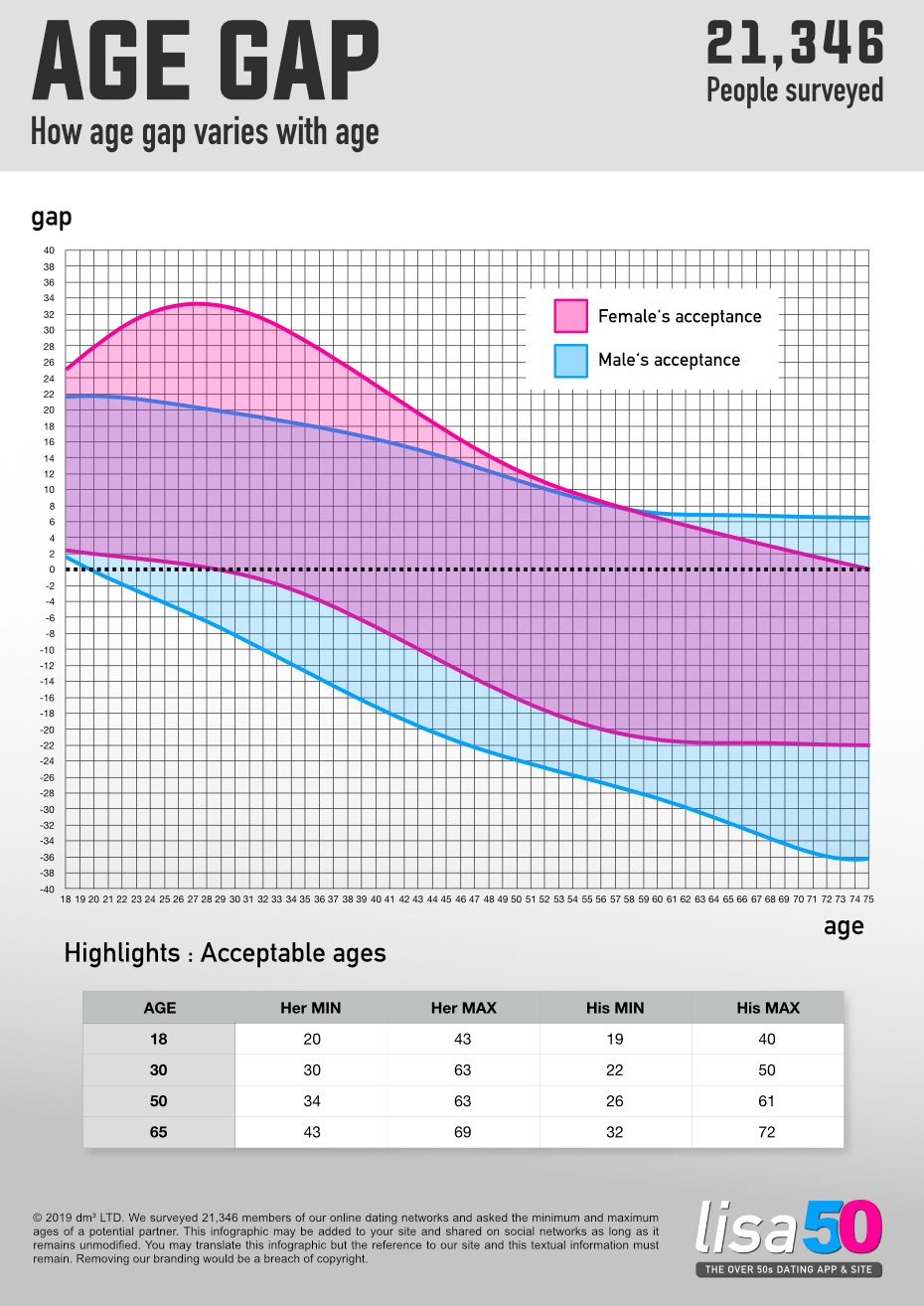 Embed this infographic on your site

Younger women prefer older men but as they age this transitions to similar age then to younger. The man’s profile is similar but as he ages his age gap range broadens with a strong tendency to younger women.

Looking at this in more detail for each gender.

At 18
She is interest in men aged 20 to 43, she wants someone mature and experienced.

At 30
Only now would she consider dating a man of her own age but would go up to 63 years old. This is around her maximum age gap and would mean after a 20+ year relationship her partner would likely have died, widowing her at 50 to 55.

At 50
She is much more interested in a similar aged man, more than any other time in her life.

At 65
The focus is now on a younger man, around 20 years her junior. If she chose an older partner he could only be a few years her senior.

At 18
He is interested in women aged 19 to 40, he is looking for maturity and worldly experience.

At 30
Unlike women, the man’s maximum age gap continues to decrease, the maximum acceptable age is now 50 years, he would also consider a 22 year old woman.

At 50
This is where is minimum age gap really increases and a woman aged 26 would be considered. His maximum age is now 61. Although he would date someone half his age this is inline with the maximum age expectations of some women.

At 65
His is still willing to increase his minimum age gap even more, from a range of 32 to 72 years old. This lower age gap desires may not be met as most women will consider this too much of a jump. He is willing to date older than a woman of the same age.

This is what some of the survey participants shared:
Female, 66, Sacramento, USA:
Younger men are great as long as there is maturity, I like their spontaneously. Older men are great as long as they aren't stuck in their ways.
Male, 51, Exeter UK:
I doubt if anyone younger than 30 would be interested in a man of 51 unless they were after money. It is often regarded as creepy, whereas if it were a woman of my age pursuing a man in his late teens and twenties, it would be more socially acceptable.
Female, 25 Las Vagas USA:
I feel weird around those younger than me when it comes to dating. It doesn't feel right. I like those older. Even if just by a year or even a day. They have to be older.
Male, 40, Ranger, USA:
I have dated a decade older and a decade younger, the only real difference is the music we like.
Female, 34, Chattanooga, USA:
I like a mentally mature man. It is great to learn from one another.

Do some women have a 2 partner strategy? An older man when they are younger and a younger man in their own old age?
Men are happy to continuously increase the minimum age gap of their partner as they mature, whilst lowering the maximum age gap. Although some may think this is ‘creepy’ there is clearly a demand from younger men to partner with an older man.
What makes an older person more attractive? Is it knowledge, power, wealth or experience.
What makes a younger person more attractive? Is it looks, energy levels, not influenced from previous partners?

Survey author, David Minns comments, 'We expected to see that men had an interest in younger women but were surprised at how large of an age gap a women would accept. Equally, it was unexpected to see that women tend to prefer younger men when they are older.'

What’s comforting for the continuation of the human race and happy relationships is the acceptable age ranges of men and women are broadly compatible.

Sharing these findings: If you would like to use any of our data for your own articles and stories please do as long as you mention lisa50.com as the source.